Spanish, French, German and British academics and researchers will participate in the First International conference: “Iron Age Peoples of the Cantabric Iron Age”, to be held in Santander to deepen the historical knowledge of the north of the Iberian Peninsula, its inhabitants and their ties with the Celtic cultures of the European Atlantic façade, between late Prehistory and the High Middle Ages.

The conference will take place in Santander (Cantabria, Spain) on May 24 and 25, and will end in Aguilar de Campoo (Palencia, Spain) on May 26 with a visit to the archaeological site of Monte Bernorio and a recital by the renowned Scottish musician John Kenny, who will play musical instruments which are replicas of ancient Celtic instruments discovered in archaeological sites from the Celtic world of the Iron Age.

This International conference has been organized by the Monte Bernorio Institute of Studies of the Antiquity of the Cantabrian (IMBEAC) and it is directed by Dr. Jesús F. Torres-Martínez, PhD in archaeology and a specialist in the Iron Age of the north of the Iberian Peninsula. 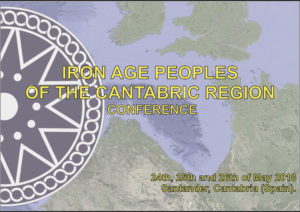 The importance of what we might call as Celtic mare nostrum will be studied throughout the congress. The Celtic sea was a crucial factor that facilitated the contacts between the peoples of the Cantabrian and the rest of the European Celtic world. The elements of the Celtic past that have survived in our time will also be analyzed.

The presentations will deal with many aspects of everyday life in the Cantabrian area in the Iron Age: culture, language, war, music, travels, the contacts with Celtic European peoples, and the struggle against Rome. We will also analyse how the Celtic sea became a bridge in the “bright” season allowing Celtic peoples living around it to meet. The speakers will also study the survival of many Celtic elements of the Iron Age in our current life, such as toponymy, land planning, elements of folklore, and several popular rites as well as some features of Christian religiosity. To sum up, senior academics and young researchers with the help of the latest technologies and scientific advances, will allow us to rediscover the past.

The three-day conference will be held in Santander and in Aguilar de Campoo; the first two days, May 24 and 25, will take place at the CASYC (Social and Cultural Action Centre of Caja Cantabria) headquarters in Santander. The third day will take place in Pomar de Valdivia (Palencia, Spain) and it will consist of a visit to the emblematic archaeological site of Monte Bernorio, one of the most important Iron Age sites in Europe. Later in Aguilar de Campoo (Palencia, Spain), Miss Raquel Jiménez Pasalodos will make a presentation on archaeomusic, and finally the famous Scottish musician and composer John Kenny, who is a specialist in ancient musical instruments, will give a recital at the Theatre Amor Auditorium. People not enrolled in the conference are welcome to attend the recital until seating capacity is reached (Cine Amor Auditorium).